The John A. Kufuor Foundation has recruited 30 tertiary-level students from across the country as new Kufuor Scholars. 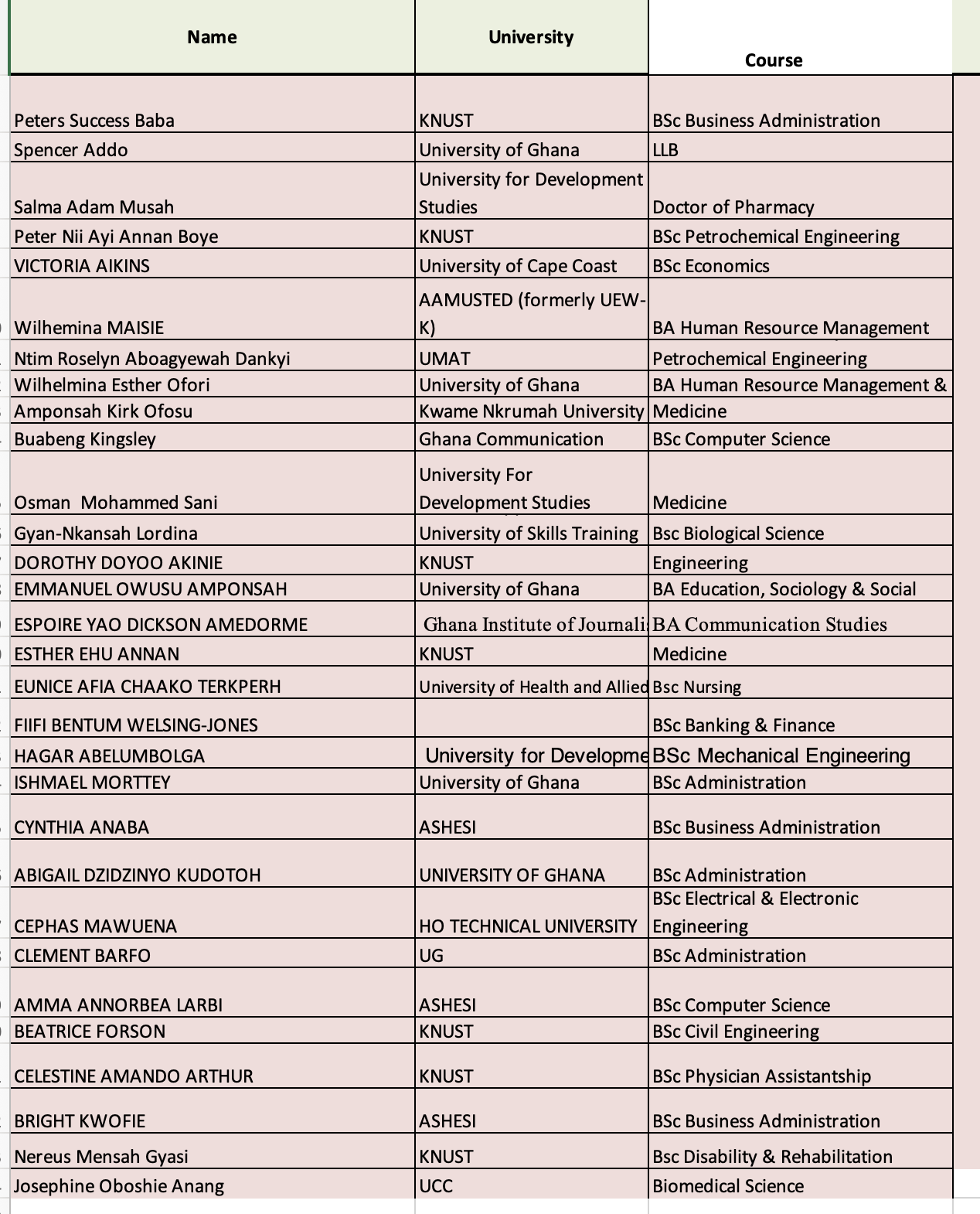 This will be the 7th batch of scholars being recruited since former President John Agyekum Kufuor launched the scholars’ program in 2014. The initiative offers mentoring and coaching opportunities for tertiary students over a three-year period. The program has the overarching objective of mentoring a critical mass of future change agents who are imbued with a strong sense of patriotism. It seeks to imbibe the former president’s effective leadership skills in these tertiary-level students so they can help develop the nation.

The program organizes boot camps, mentoring sessions, workshops, and related activities that aim at transforming the lives of these young people. More than 150 young people have benefitted so far.

2,825 students registered to compete for the 30 slots this year, out of which the number was pruned down following rigorous assessment and interview sessions by internal and external assessors. This batch is known as the Kufuor Scholars Class of 2025, as they will remain in the scholars’ program for the next three years.

Dr. Pascal Brenya who is the coordinator of the Kufuor Scholars Program explained the screening process sought to identify young people who are passionate about leadership so they can be groomed.

“It’s not just about being good in academics and being articulate. We want to shift focus from the kind of leadership where people are articulate but empty. So, we looked at a whole lot of physiological build-ups of individuals, the person’s ability and willingness, as well as Integrity,” he said.

Dr. Benita Fidelis of Valley View University who is one of the external assessors who screened the applicants said the quality of leadership potential displayed by the young people is encouraging. “The interview session was amazing. It was amazing because my hope for Africa was once again ignited. Seeing young ones, they are not just intelligent but passionate about what they do. And passionate about their hopes that through their efforts, they can make a difference not just in Ghana but across the continent of Africa,” she said.

“It was a tight interview. We had so many students who did so well, but we know not all of them can be taken in at once by the foundation… Congrats to the final 30. For those who didn’t make it, keep trying. It’s never over until it’s over,” she added. Dr. Fidelis lauded the scholars’ program as a “one-of-a-kind” initiative that will go a long way to help develop Ghana and the continent of Africa.

Another external assessor Julius Manu who is an entrepreneur and consultant said the screening process was exciting and eye-opening. “It’s quite reassuring to note that there are young people in this country who are of a certain caliber and intelligence. That gives us hope for the future, looking at their perspective on issues, and their level of intelligence as compared to their age and level of education,” he said.

“We should have some of these young people to lead this country. It’s the depth of reasoning that amazes me. How critical they look at issues and their position on some of the national issues. As a matter of fact, they have outperformed our politicians because they are objective,” Mr. Manu added.

The assessors however expressed concern students were generally weak in the subject of geography. “It amazes me that some don’t even know the capital cities of a few countries. Some can’t even define what an Island is. Back in the day, these were things that you learned at the primary school level. And I think the Ghana Education Service should reconsider the emphasis on some of these subjects in the integrated courses,” Mr. Manu said.

Dr. Pascal Brenya said the training of the new scholars is expected to begin in earnest at the end of the month. “By the design of the former president, we take these guys to a very remote area for 2 weeks. It’s 2 weeks of challenge. That’s where they unlearn, relearn, and learn again… So, this batch will go for that by the end of the month,” he disclosed.