The John A. Kufuor Foundation has inducted 30 new scholars into the Kufuor Scholars Program.

At a ceremony at the foundation’s premises in Accra that was attended by former President John Agyekum Kufuor who is chairman of the foundation, the 30 new scholars swore an oath to live by the principles of integrity, patriotism, transparency and accountability.

Chief Executive Officer of the foundation Prof. Baffour Agyeman-Duah told the ceremony a total of 2,291 students applied to be members of the new class, out of which about 200 successfully complicated the application process. 56 were shortlisted for in person interviews out of which the final 30 were selected. The final 30 consists of 16 males and 14 females from 7 different universities. 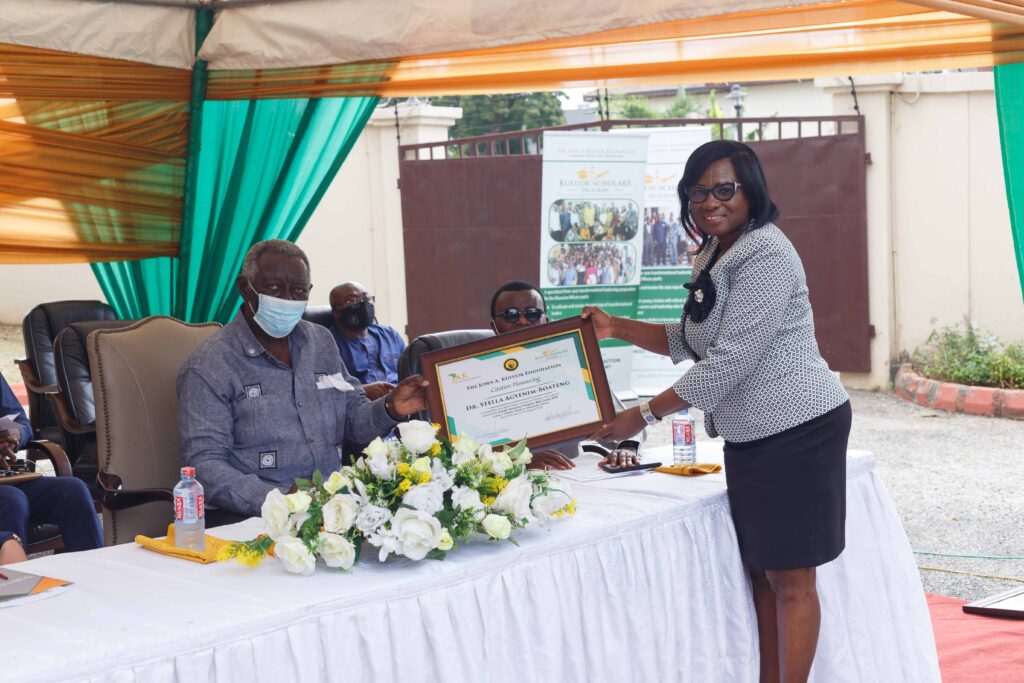 “Let me congratulate the final 30 scholars who were selected…. We have worked with 112 scholars so far including 65 females and 47 males, representing 16 different universities in the country. That’s how far the program has come over the last five years,” Prof. Agyeman-Duah noted.

“We are hoping to go global, not only to select Ghanaian students, but African students who enroll in Ghanaian Universities. So, we want to extend a little bit into the rest of Africa. We are very satisfied with the program so far although we know there are things we can do better,” he added. 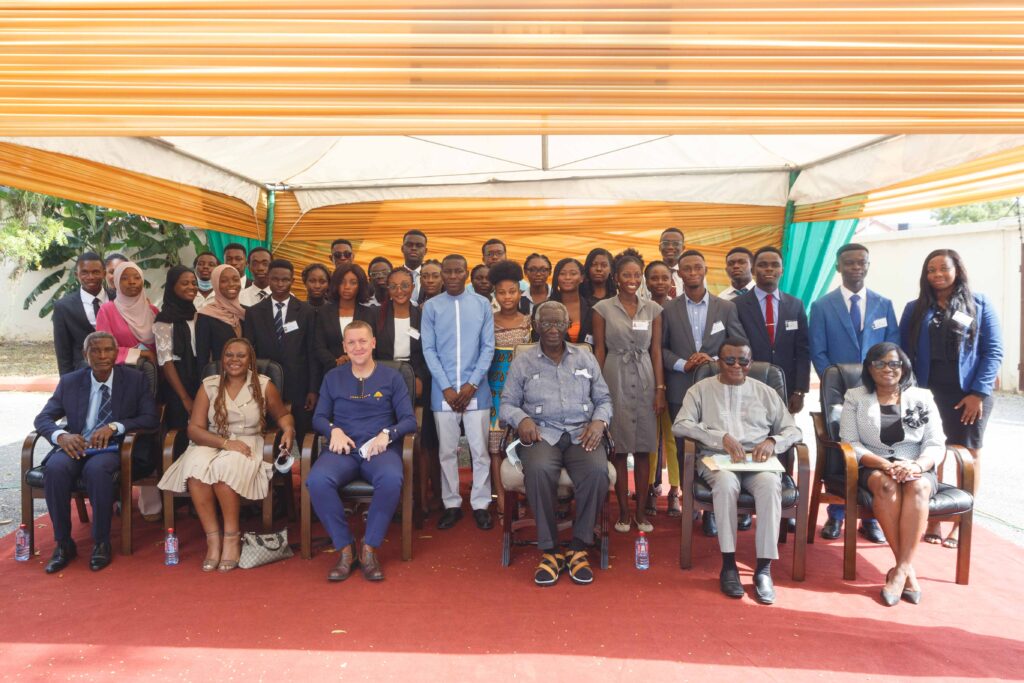 “Because the Kufuor Scholars Program has passed a five-year mark, we have commissioned a professional group to review the program for us to have a clear assessment of how we carry the program forward,” the CEO said.

The Kufuor Scholars Program is a leadership program that mentors and trains students in tertiary institutions over a three year period. Majesty Batera Bohitana, one of the newly inducted scholars who were recruited in August 2020 told the ceremony it’s already impacting her life positively. “It’s been an impactful journey so far… KSP has been one of the most inspiring and highly impactful programs I have ever come across. The experiences so far can never be washed away,” she observed. 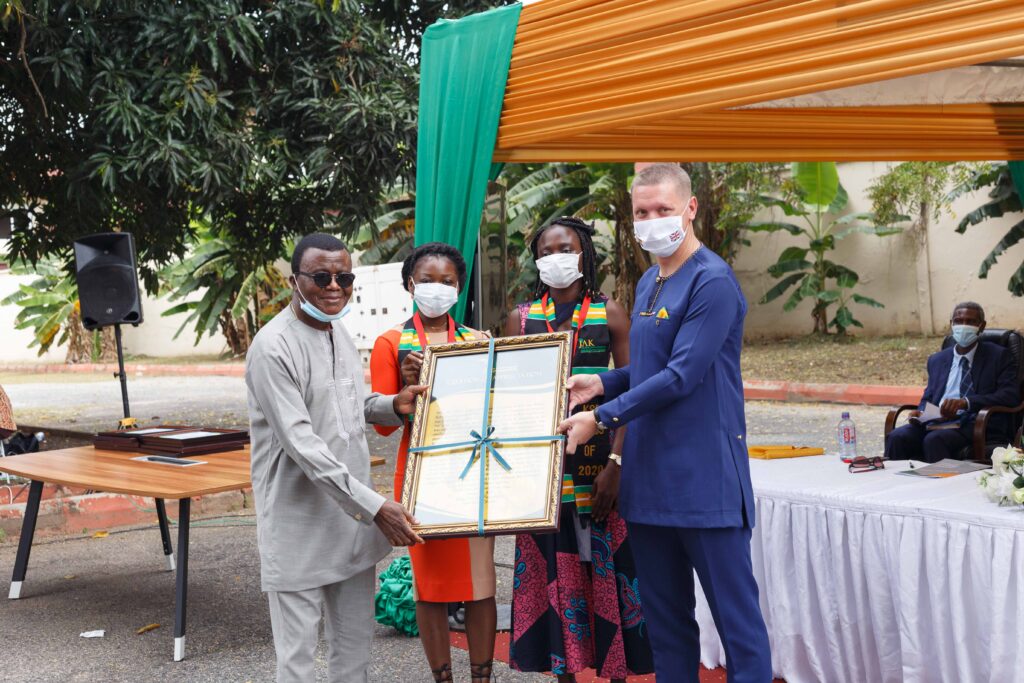 Certificates and laptops were presented to the inductees by the UK High Commissioner to Ghana, Iain Walker. 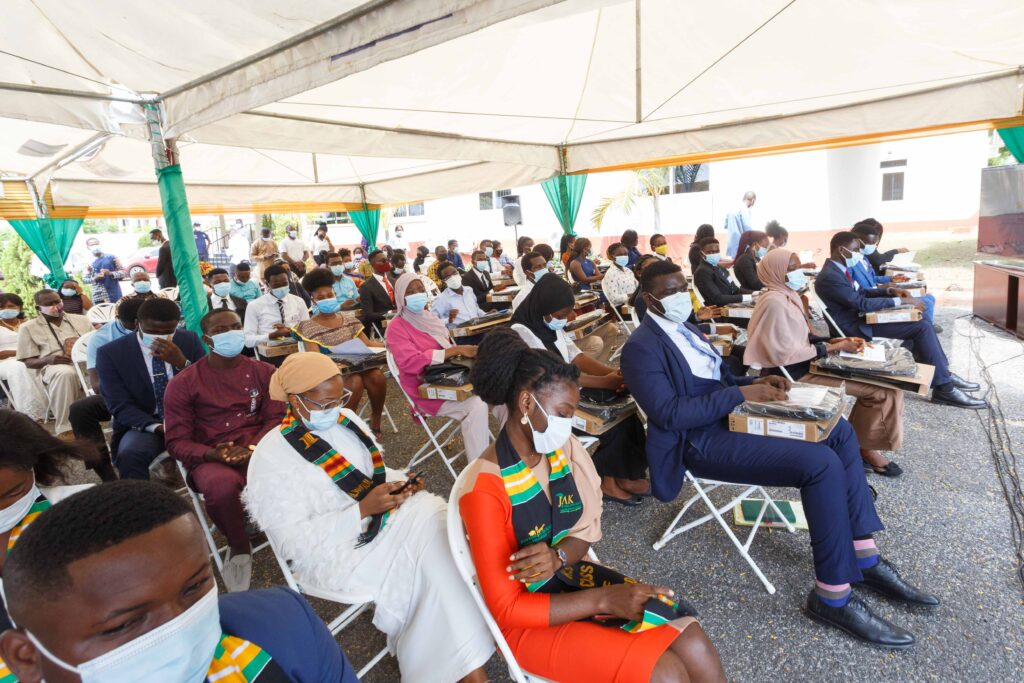 The occasion was also used to graduate members of the Kufuor Scholars Program class of 2020 who have completed their three-year training. Former President John Agyekum Kufuor presented certificates and medals to the graduates. Coordinator of the Kufuor Scholars Program Dr. Pascal Brenya commended them for keeping high academic standards despite their involvement in various leadership activities. “80% of them finished school with first class… this is really great that you will still be bright academically and still go through the training here,” Dr. Brenya observed. 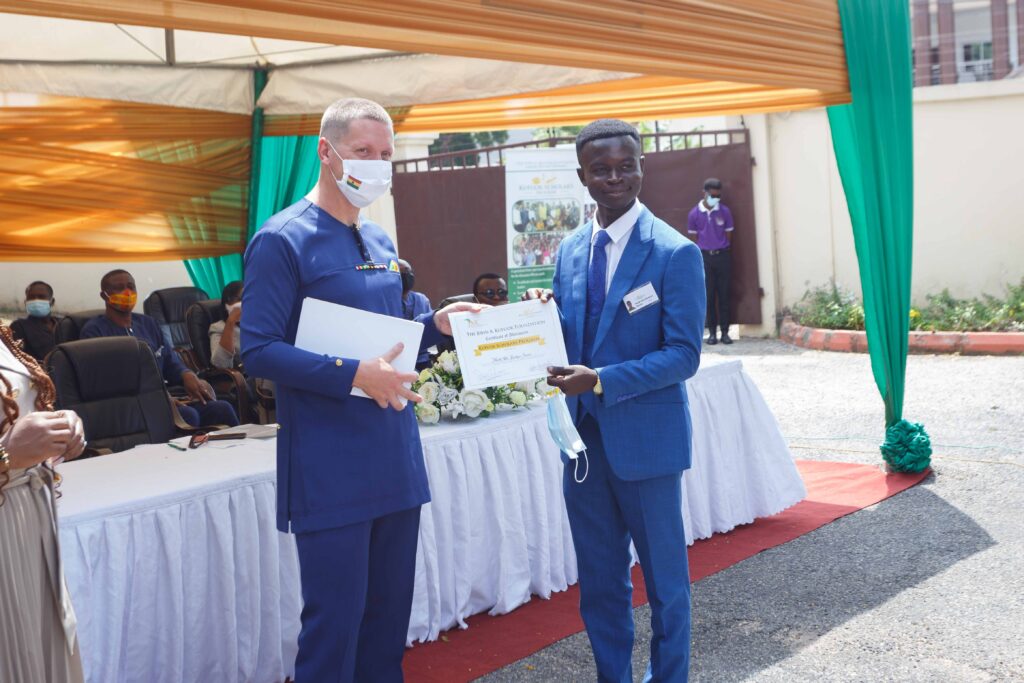 Deputy Chief Executive Officer at the Volta River Authority Dr. Stella Agyenim – Boateng in a message to the graduating scholars charged them to be great ambassadors. “Whatever ethical values have been imbibed in you, go out there and deliver same,” she told the scholars.

The graduates were full of joy. “Today, I am graduating into the next phase of transformational leadership… To our grandfather, His Excellency President John Kufuor, we thank you for investing in us,” one of them, Victoria Antwi said. 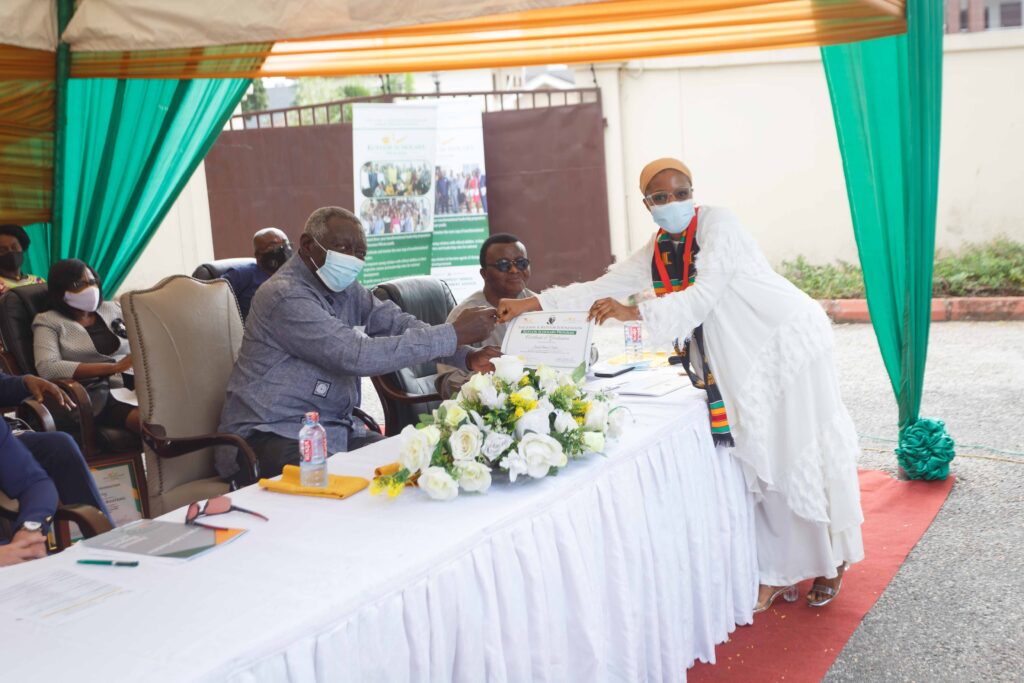 Madam Josephine Mensah, a trader at Makola who is mother of one of the graduates expressed gratitude to the foundation for transforming the life of her ward. Another parent Apostle Philip Mandela told the ceremony his ward’s attitude, character and moral life have changed for the better as a result of her participation in the program. “The foundation is really raising leaders for the future,” he said. 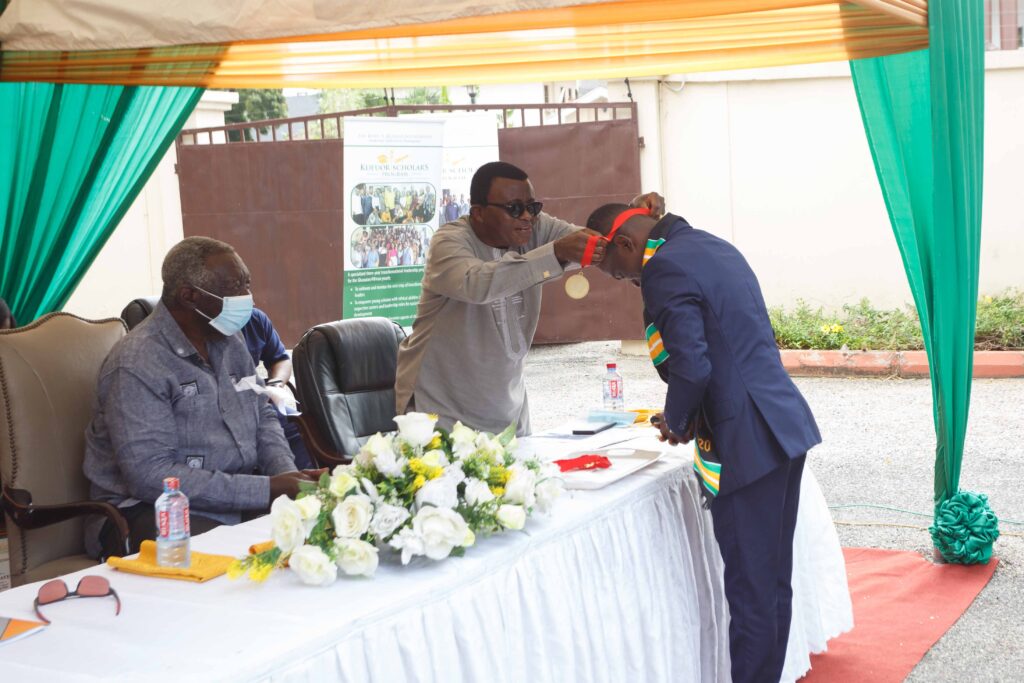 President of the Kufuor Scholars Alumni Salman Mohammed urged the graduating class to be “great ambassadors.” “Let us exude the former president’s leadership in our conduct and attitude towards work,” he said. 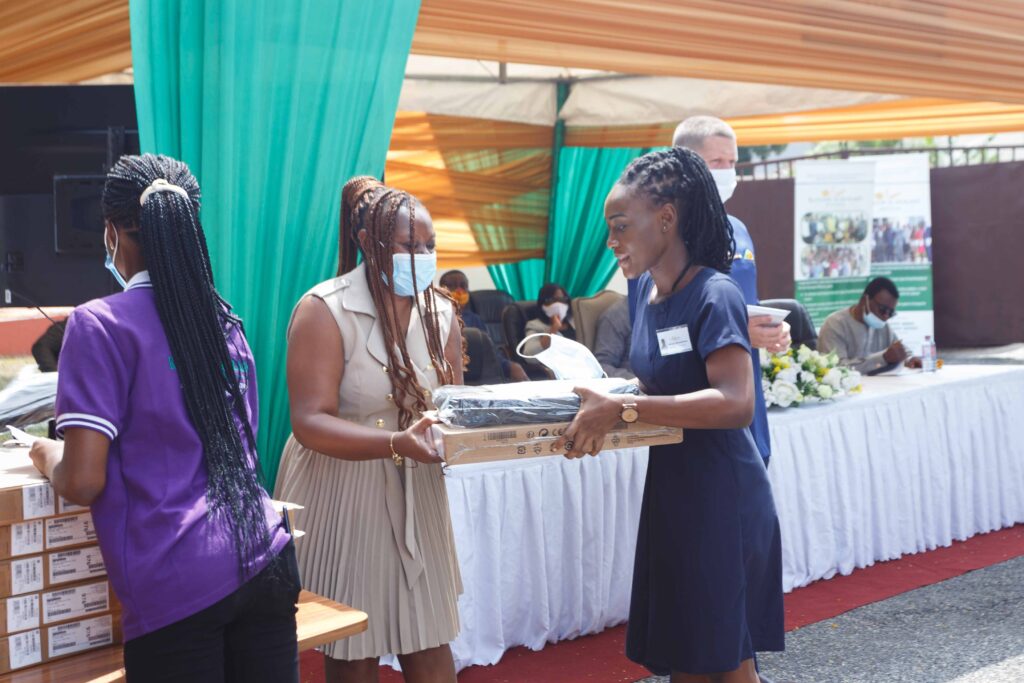 Director of Finance and Administration at the foundation Kofi Kufuor said the institution spends about $20,000 training each scholar every year. He expressed appreciation to partners and donors for their continued support.

In a keynote address, British High Commissioner to Ghana Iain Walker said he is hopeful the scholars will rise to higher heights going into the future. He urged them to pursue lifelong learning and collaborations as they go out into the world. “It’s not about what individuals do, it’s about what people do together,” he said. 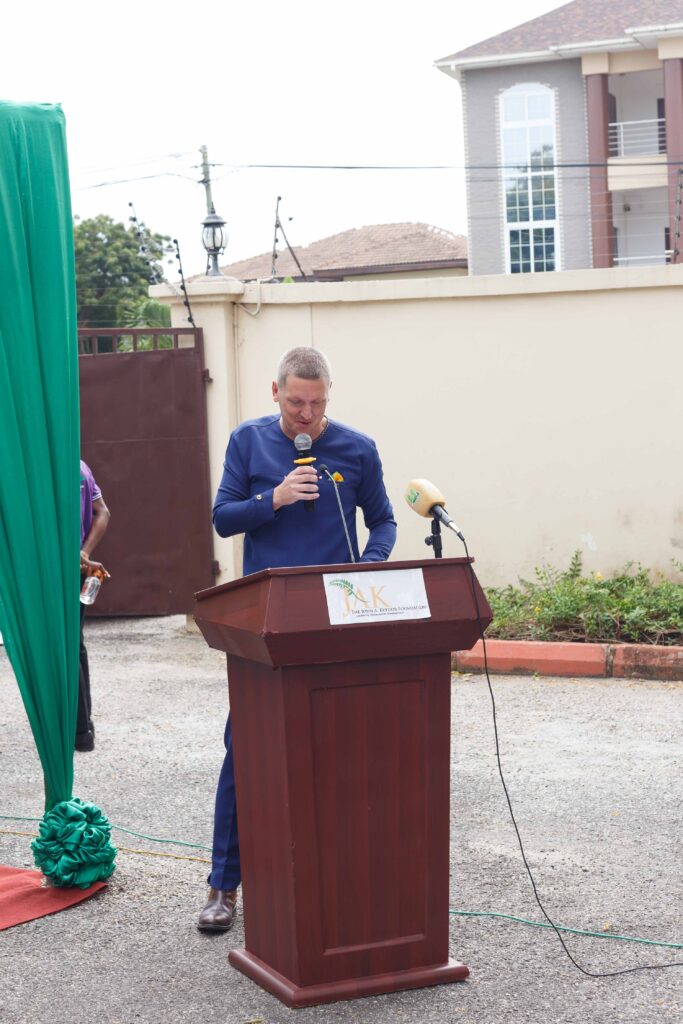 Former President John A. Kufuor said he was pleased the scholars were learning to lead in the right way to transform Ghana and Africa. “Five years ago, we started this journey of training and mentoring transformational leaders and so far, our collective efforts have turned out great results for our community and the nation,” he said. The former president urged the scholars to continue working hard. “Excellence has no limits. So please pursue further heights and deepen the gains you have already achieved,” he said.