The newest batch of students recruited to join the Kufuor Scholars Program (KSP) have been officially introduced to former President John Agyekum Kufuor at his residence at Peduase.

This new batch, numbering thirty (30) is the Class of 2023, as they will be graduating in 2023 after spending three years in the programme.

The candidates were recruited after a competitive and rigorous process. For the first time, selection interviews for the shortlisted applicants were conducted virtually. Those who were hard to reach because of internet network difficulties had to be interviewed by phone calls.

This latest batch of 30 brings the total number of scholars who have gone or are going through the program to 112.

“On behalf of the chairman and the staff of the John A. Kufuor Foundation, I wish to congratulate you all for this feat and the journey of being a change maker in Ghana and the world. We are confident that they will excel in the program and become the future leaders of integrity that President Kufuor envisioned,” Chief Executive Officer of the John A. Kufuor Foundation Prof. Baffour Agyeman – Duah told the students during the introduction ceremony.

The Kufuor Scholars Program is an initiative of the John A. Kufuor Foundation which offers mentoring and coaching opportunities for selected tertiary students. Former President Kufuor is the brain behind the establishment of the foundation and is chairman of the board. The Kufuor Scholars Program has the overarching objective of mentoring a critical mass of future change agents; leaders imbued with a strong sense of patriotism; leaders who are innovative, problem solvers, creative thinkers and knowledgeable professionals in their respective fields of endeavor.

“Since the inception of the program in 2015, it has given leadership exposure to beneficiary students through leadership/mini camps which is normally organized every quarter for new and old scholars… Scholars also undertake personal projects which have over the years challenged them to innovatively design tools to address pressing needs in Ghana and Africa,” Prof. Agyeman – Duah noted. “It is our hope that, the new batch will take advantage and benefit from the aforementioned life-changing opportunities which will add value to what they study in their various disciplines in school,” he added. 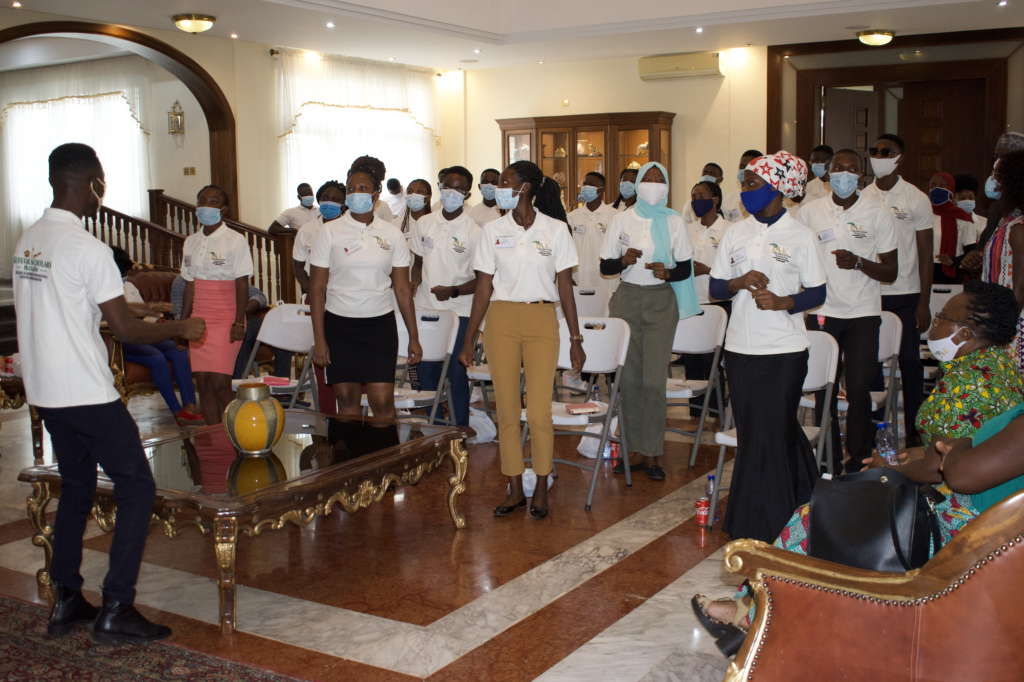 One after the other, the students took turns to introduce themselves personally to the former president and exchanged elbow shakes with him. Coordinator of the Kufuor Scholars Program Dr. Pascal Brenya said their training has since began in earnest. “The formal orientation and the first leadership lamp which is normally held in July every year has now been postponed tentatively to December 2020. Taking into consideration the safety of students, government’s regulations on COVID-19 and with the anticipation that, corona virus would’ve been normalized by then,” Dr. Brenya explained.

Former President John Agyekum Kufuor urged the scholars to be of good behaviour and not see politics and leadership as a means of making money, but rather a means of improving society. He urged them to live above reproach. “I am telling you not to try and cut corners to make headway. I didn’t come by money through politics, I hinted that I was born into privilege,” he told the scholars. “You want to do good work in politics, you needn’t be corrupted, do your work well but always knowing how to live within your limit,” he added.